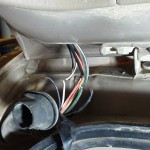 The tailgate lock on our 2001 Acura MDX recently started working intermittently.  Sometimes it wouldn’t lock and other times it would stay locked and there was no way to open the back other than crawling into the back and using the manual unlock lever found in the little hole at the bottom center of the inside of the tailgate.  I tested the lock actuator by hitching it up to a 12V source and it was working fine and cleaned and lubricated all of the rear latch components.

When I tested the voltage to the rear lock actuator it was not registering when locking or unlocking using the key fob.  The issue ended up being several broken wires in the rear wiring harness.  Since this is an older vehicle I didn’t want to spend the money on a new harness, so implemented a reasonably easy fix:

The first thing I did is pulled the top portion of the wiring harness cover dust cover at the top left of the tailgate.  This is the exposed portion that gets flexed every time you open and close the tailgate.  The top portion gets flexed the most and sure enough around and inch down 4 wires were broken and one had cracked insulation.  Since I didn’t want to spend the next day locating and changing fuses, at this point I disconnected the battery.

Since there is no way to remove the dust shield without pulling all of the wires I carefully cut away with some scissors the top 2 inches, being careful to cut as little as possible to reach the broken wires and used some electrical tape to push the remainder of the dust cover as far down and out of the way as possible. 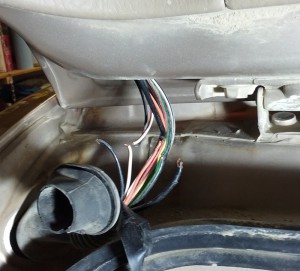 Since I wanted to leave as much flex in the wires as possible I decided to soldier the broken wires and use heat wrap insulators instead of rigid crimp quick connectors.  Be sure to slide any heat wrap insulation on before soldiering the wires and have them far enough away so they don’t shrink during soldiering.  I also double wrapped some of the larger wires with electrical tape. 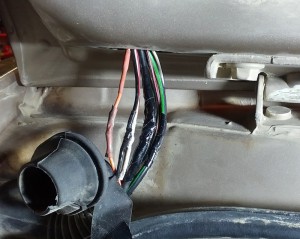 Once the wires are fixed, wrap the cut portion of the dust cover with electrical tape, re-seat the dust grommets, reattach your battery and you are good to go.  This not only fixed my lock issues, but also the rear defrost that was also a result of a broken wire. 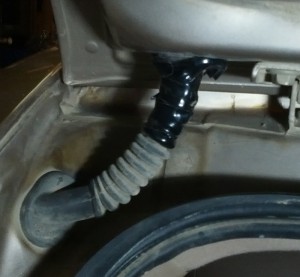