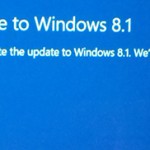 When performing an update on my Surface Pro from Windows 8 to Windows 8.1 I received an error message of:

Sorry, we couldn’t complete the update to Windows 8.1.  We’ve restored your previous version of Windows to this PC

This was particularly frustrating since I had updated my desktop computer without any issues and I expected my Microsoft Surface Pro, since it was 100% Microsoft hardware, to certainly update without any problem.

The solution ended up being to simply run the update a second time and it worked without any errors.  There are 2 things I did different the 2nd time:

I expect the cause of the original issue was since the install was taking a long time I left the Surface to complete and when I came back it was in sleep mode.    My best guess is there was some type of interaction between the more aggressive sleep mode when the battery was in use that caused the Surface to go to sleep and may have contributed to the error.  The fact that it crashed the first time and worked without any issues the second time other than the 2 changes above is a bit baffling.

3 Responses to Couldn’t update to Windows 8.1 Error 0XC1900101 Solution that worked for me