By admin on November 6, 2013 in It Worked for Me, Technology

I recently upgraded my main workstation to Windows 8.1 and shortly afterwards my computer started locking up and blue screening.   I traced the issue to new Nvidia drivers that were installed automatically during the Windows 8.1 upgrade (Drivers 9.18.13.2723).  I tried rolling back to the Nvidia 327.23 drivers and the 320.18 drivers  from earlier this year, which eliminated the blue screens but still resulted in several “Display driver has stopped responding and recovered” messages per day.  I tried uninstalling all of the 3D and physics engines, but still had issues.  I recalled having similar issues when I originally installed Windows 8 and having to roll back to an older version.

What eventually resolved the problem was to install an old set of Nvidia drivers from Aug 30, 2012, version 306.23 which you can find here: http://www.nvidia.com/object/win8-win7-winvista-64bit-306.23-whql-driver.html.  I performed a clean install and didn’t install any of the option goodies (Screen shot below)

I do have a bit of an uncommon multiple video configuration since I run two GeForce GTX 560 Ti cards that drive 4 monitors, but its odd that all of the newer versions of the Nvidia drivers appear to have issues with my card configuration, but the 306.23, which I believe were the original windows 8 compatible drivers have been rock solid for me. 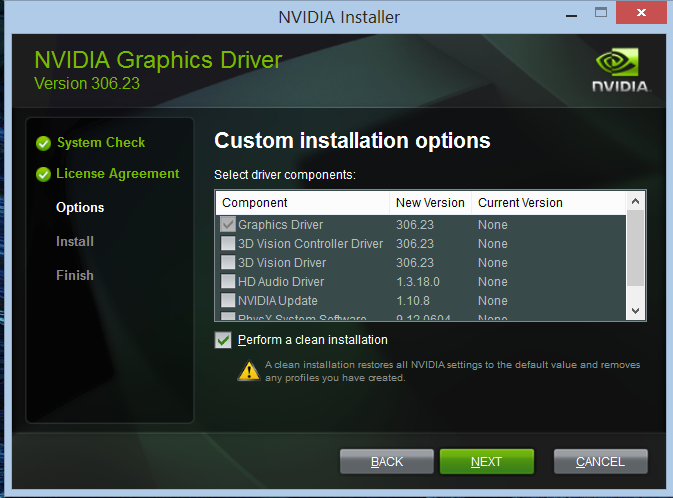 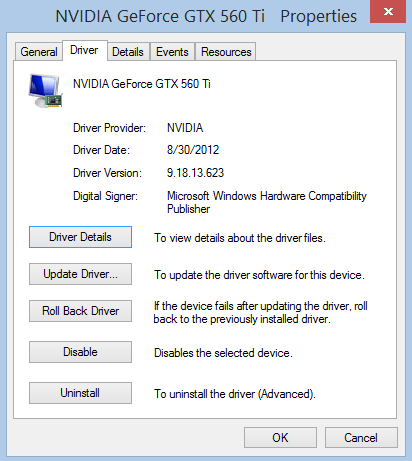 Yesterday Windows Update ran on my system and merrily downloaded the latest Nvidia driver (331.65) and overwrote the older driver I had installed to resolve the constant crashes.  Being in an optomistic mood that day I decided I would try the new driver in hopes that the crashing issue had been resolved.  Alas, within 2 hours all of my screens flashed to black and eventually after 2 minutes came back with a message of “Display driver NVIDIA Windows Kernel Mode Driver, Version 331.65 stopped responding and has successfully recovered”.

I went into the device manager and used the “roll back” option to return to my previous driver.  Unfortunately the new driver does not roll back elegantly, and after I selected rollback all of my screens went black, and after waiting for over 30 mins for them to recover ended up doing a hard reset on the computer.  Fortunately on the reboot the 306.23 driver was back in place and my display has been stable since.

It appears that a new driver is available (finally) that works with the dual video cards without crashing. I have been running driver version 9.18.13.3523 (date 3/4/2014) for the past 2 months without any issues.

View all posts by admin →
Galaxy Nexus not connecting after Windows 8.1 Upgrade
Honda Civic won’t shift out of park or start

One Response to Nvidia multiple displays crashing in Windows 8 or after Windows 8.1 Upgrade Solution