Occasionally I receive an error in Microsoft Outlook 2013 of:

“The operation cannot be performed because the message has changed”

when replying to an email. This usually happens when I am typing a particularly long response, which is especially frustrating since I have lost my message a couple times trying to overcome this error.

I have also received a related message of:

“The operation failed.  The messaging interfaces have returned an unknown error.  If the problem persists, restart Outlook.”

The error also only occurs with my IMAP emails.  This error appears to have caused by Outlook saving a copy of the email into the “Drafts” folder which is then out of sync with the reply in the inbox.  If you are fast with your replies before the autosave to the drafts folder this issue will not occur.

1 – Go into the “DRAFTS” folder and select the saved message instead of editing the one in the inbox, which you can then edit and send without any issues.  Beware though since recent edits to the inbox version may not be in the Drafts version 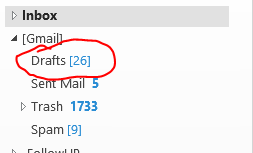 2 – Select the “POP OUT” button to open a full windowed version of the reply.  Then click the “SAVE” disk at the top left.  This seems to get the Draft and Inbox version in sync, which will then allow you to send the message without the error.  Oddly enough there doesn’t appear to be any way to access the “Save” option for the message when using the new embedded reply feature.

I’ve experienced this issue across multiple systems to varying degrees and on at least 2 systems the root cause was the antivirus add-in re-scanning messages after they had been downloaded which was triggering the “message has been changed”.  Disabling the integrated Antivirus plug in resolved the problem.  In the case of ESET antivirus disabling the “Repeat Scan after Update” option in the ESET tab in outlook solved the issue.

A note that the most recent version of ESET (version 7.0.302.26 and higher) appears to have resolved the issue reported above and is not triggering the “message has been changed” error.