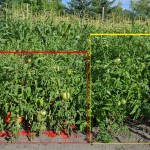 This spring I picked up some red mulch plastic for use under my tomato plants.  The claim is that the red mulch reflects a spectrum of light that helps tomatoes grow.  I was skeptical, but since the claim was being made by Lee Valley, which in the past has never steered me wrong, I thought I’d give it a try.  I used the “super red mulch” ( http://www.leevalley.com/en/garden/page.aspx?c=&cat=2,2300,33272,10532&p=10532) and planted 2 rows of tomatoes with the mulch and 2 rows without as a control.  The two adjacent rows of plants were planted the same day, are the same variety, and have had the same amount of water, fertilizer, etc.  I punched quite a few holes into the red mulch to try to allow as much water as possible to make its way into the soil.  There is a noticeable difference with the tomatoes that use the red mulch.

Overall the mulch appears to have made a positive difference.  Next year I’ll probably put it under all my tomatoes and also try it with the strawberries.