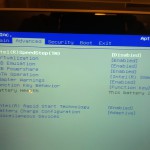 As a bit of background, In Sept 2014 I purchased a Dell XPS15 with an I7 processor.  It took almost a month to arrive, and when it finally did I noticed a high pitch whining noise coming from it periodically.  Originally I thought it was some type of hard drive noise, but narrowed it down to an electrical noise, similar to an old fashion electrical choke whine, which was loudest when the notebook was 100% charged.  I called Dell support to report the issue, and they dispatched a technician that replaced the motherboard.  That did not resolve the issue; so they sent another motherboard that was a different part number, a new power adapter, and a new power connector.  These took several weeks to arrive, and once installed did not only not solve the issue, but were louder than the original motherboard.  They then ordered a brand new notebook from the factory, which finally arrived the middle of December.  In the meantime I fiddled with the original notebook, and since I had a total of 4 different motherboards with various levels of issues I thought I would share what successes I ended up having with the different motherboard versions.  A note that what worked on one motherboard did not always make a significant difference on a different motherboard, which is why I titled this posting “potential solutions” since what worked for me may not work for you if your motherboard version is different.

Hopefully the notes above and the frustration I had with this notebook over the past months will assist someone else with their own XPS noise issues.  Other than this one issue the XPS 15 is a wonderful notebook, with one of the best displays I’ve ever seen. I’m hopeful that this latest replacement unit will now stay quiet and serve me well for many years.

UPDATE:  Shortly after receiving this replacement XPS 15 it developed a trackpad issue, which resulted in another couple months of service attempts and eventually a THIRD replacement XPS 15.  You can read about my woes with the track pad here.